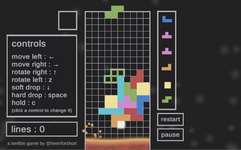 A few people are following tetrible, if I am to believe the feature requests and complaints about how the game is bad (but in a good way). Since not everyone has Twitter, I figured blog posts would be as good a way as another to keep you updated on the development of this project.

Anyway this week, the floor is lava!

I really liked making this version, and I hope you will too. I’m trying to learn shader programming these days, so I made the lava myself. I don’t think I did too bad!

I also had enough time to fix some of the bugs and add a few features:

That’s it for this tuesday, enjoy the game and watch out for the lava!

a terrible spin on a very good arcade puzzler